Respository for the I/O 2019 demo: Become a tech lead, slay bugs, and don't get fired.

Become a tech lead, slay bugs, and don't get fired.

The game progression is based on a "research tree" of tasks. The tree is defined in code in lib/src/shared_state/task_tree but for clarity it is also kept as a diagram in assets/docs. Here's the PNG.

Attach a real device and run the following command from the root of the repo:

This will do an automated run-through of the app, and will save the output to files.

If you want to get several runs at once, you can use something like the following command:

Why run several times when we get so many data points on each walkthrough? With several identical walkthroughs it's possible to visually check variance between runs. Even with box plots, these nuances get lost in the summary stats, so it's hard to see whether a change actually brought any performance improvement or not. Running several times also eliminates the effect of extremely bad luck, like for example when Android decides to update some app while test is running.

Lock CPU and GPU speed for your performance test device

Run the following command when your performance test device is attached via USB.

Where to store the profiling data

You probably don't want to check the *.tsv output files into the repo. For that, run git update-index --assume-unchanged test_driver/*.tsv in the root dir. This is a one time command per machine.

A simple app to demonstrate a testable, maintainable, and scalable architecture for flutter. flutter_bloc, hive, and REST API are some of the tech stacks used in this project.

last_fm A simple app to demonstrate a testable, maintainable, and scalable architecture for flutter. flutter_bloc, hive, and REST API are some of the

Flutter application for the online hackathon MORE.tech 3.0 from VTB

Flutter application for the online hackathon MORE.tech 3.0 from VTB

Using weather application and get weather information daily and daily

Generate a new file by compressed video, and provide metadata. Get video thumbnail from a video path, supports JPEG/GIF. To reduce app size not using FFmpeg in IOS.

flutter_video_compress Generate a new path by compressed video, Choose to keep the source video or delete it by a parameter. Get video thumbnail from

An end-to-end Flutter app built to get details and trending recipes - made as a part of the book 'Flutter Apprentice' by raywenderlich.com

Starter app for Flutter that includes many different production app features; some not typically included in demo apps.

Weather Fake App A new Flutter application. Getting Started This project is a starting point for a Bloc Pattern in Flutter. This Simple Demo for bloc

A demo flutter mobile app for a Bureau De Change

demo_books A new Flutter project. Getting Started This project is a starting point for a Flutter application. A few resources to get you started if th

A demo of the socials-sign-in in flutter

socials_sign_in A new Flutter project. Getting Started This project is a starting point for a Flutter application. A few resources to get you started

test_ads A Flutter demo app to implement google admob ads. Getting Started important - if you are cloning the repo to your desktop, you will need to p

A basic demo example for integrating between Appwrite & Flutter 💙 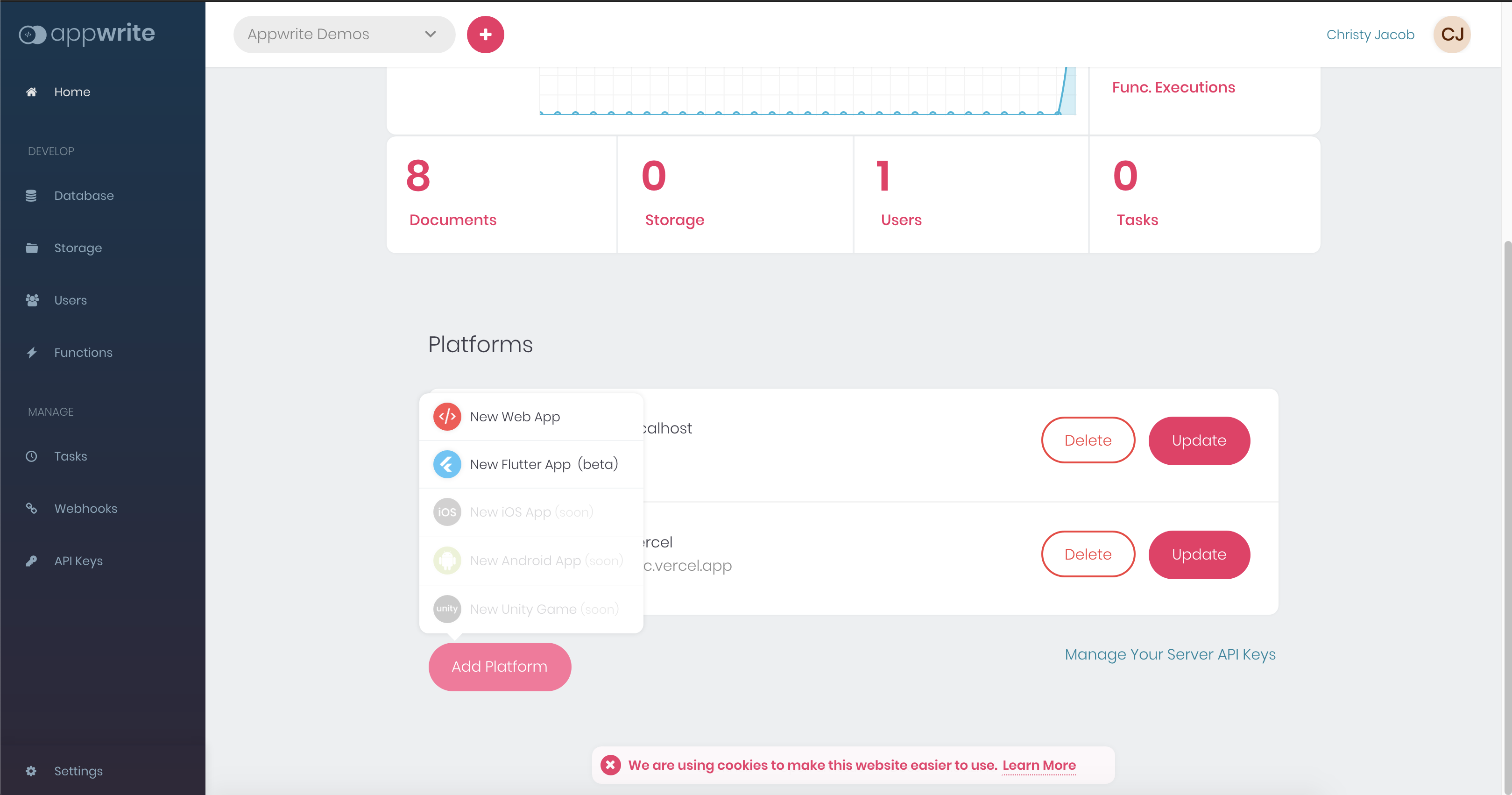 ?? Quiz With Flutter A simple Quiz App built with Flutter and Appwrite ?? Getting Started ?? Install Appwrite Follow our simple Installation Guide to

A flutter example demo of how to use the screen capture.